Some people are puzzled about how bioenergy can contribute to climate change mitigation because burning biomass emits carbon dioxide (CO2). There have even been headlines in the media claiming that “biomass is worse than coal”. In fact, it is perfectly true that a bit more CO2 is released per unit energy from biomass than from black coal – this is purely a consequence of the chemical composition of biomass and coal. 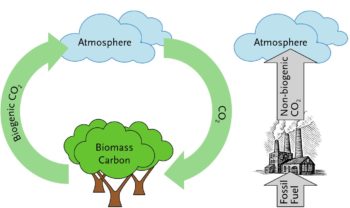 However, statements like “the use of woody biomass for energy will release higher levels of emissions than coal” overlook the fundamental difference between energy supply from fossil fuels and from biomass: burning fossil fuels releases carbon that has been locked up in the ground for millions of years, while burning biomass emits carbon that is part of the biogenic carbon cycle. In other words, fossil fuel use increases the total amount of carbon in the biosphere-atmosphere system while bioenergy systems operates within this system; biomass combustion simply returns to the atmosphere the carbon that was absorbed as the plants grew.*