Green, sustainable and recyclable bio-based carbon is one of the central pillars of the future renewable energy mix and biobased economy. Industrial efforts to optimize the use of biomass-derived carbon as biofuels are rapidly maturing, leading to increasing amounts of bio-based liquid products becoming available. Research and development have led to advancements in biomass liquefaction technologies such as fast pyrolysis and hydrothermal liquefaction. However, traditional upgrading of bio-oils and bio-crudes into drop-in fuels by hydrotreatment can be expensive as it requires large-scale infrastructure and an external hydrogen source. In addition, current bio-oil hydrotreating technologies are challenged by low yields and catalyst deactivation. More recently, electrochemical processes have been considered to upgrade biomass-derived molecules to produce valuable biofuels and biochemicals. Although the research is still emerging, electrochemical processing technologies appear promising, especially if green electricity can be used.

Electrochemical reactions leading to deoxygenation of organic compounds are likely to reduce the bio-oils’ acidity while increasing its stability and energy content. This could improve the long-term storage of pyrolysis liquids, thereby enabling subsequent upgrading treatments to further improve biofuel quality.

Electrochemical upgrading of bio-oils is worth consideration compared with conventional bio-oil hydrotreating techniques (such as hydrogenation, hydrocracking) for a variety of reasons:

However, the integration of pyrolysis and electrocatalysis is currently at an early stage of development. Fundamentally, electrochemical catalysis favours single molecules transformations, while DTL bio-oils are complex mixtures of hundreds of compounds. This is considered a major challenge to the capability of electrochemical catalysis for upgrading of bio-oils. Because electrocatalysis is only capable of treating certain bio-oil compounds and functional groups, some additional treatments may be needed to link fast pyrolysis with electrochemical catalysis better. These include bio-oil fractionation and bio-oil stabilisation. In addition, techno-economic assessments need to be carried out with comparison to conventional hydrotreating techniques. 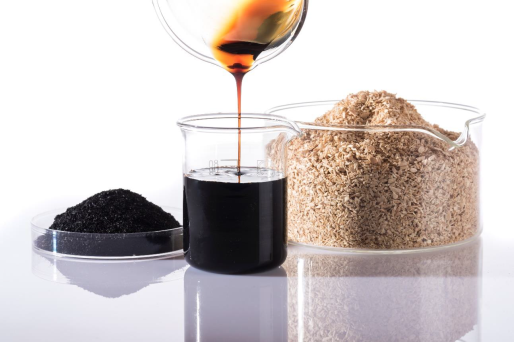 To be or not to be a biobased commodity

Case study about a MSW sorting facility in Norway – IVAR