Progress in the Commercialization of Biojet / Sustainable Aviation Fuels: Technologies, potential and challenges

This report, prepared by IEA Bioenergy Task 39, provides an extensive analysis of the current and potential technologies for production of biomass based sustainable aviation fuels (Biojet/SAF).

Sustainable Aviation Fuels will have to play a major role if the aviation sector is to significantly reduce its carbon footprint. However, to date, commercialization has been slow and current policies have proved inadequate to accelerate commercialization and widespread deployment of the various technologies described in the report.

As described in IEA’s recent publication Net Zero by 2050: A Roadmap for the Global Energy Sector, although synthetic hydrogen-based jetfuels will also play an important role in the future, in the short-to-mid-term biojet fuels will predominate. Commercial battery electric and hydrogen aircraft are expected to play a small role in the 2050 timeframe.

Annual volumes of biojet fuel have increased in recent years, from less than 10 million litres in 2018 to likely more than 1 billion litres by 2023 (and potentially ~8 billion litres by 2030!), with the vast majority of this volumes derived from lipids/oleochemicals via the HEFA (hydrotreated esters and fatty acids) pathway. As described in the report, the upgrading of fats, oils and greases (FOGs) to HEFA is fully commercialized and biojet production is relatively simple compared to other pathways. Currently, these facilities are primarily used to make renewable diesel (driven by incentivizing policies for road transport), however, about 15% of this renewable diesel could be separated and used as Biojet/SAF, provided some additional infrastructure is established at the refinery.

The report summarizes the various technologies that are currently being pursued to produce Biojet/SAF from alternative feedstocks, with several commercial-scale facilities coming online over the next few years. The various technologies include gasification and Fischer-Tropsch to jet, alcohol-to-jet and catalytic hydrothermolysis jet (CHJ). Several of these pathways and fuels have already received certification, under ASTM, to be used in commercial aviation. Although other technologies, such as pyrolysis and hydrothermal liquefaction are under development, they are not yet ASTM certified.

As deployment of HEFA is constrained by the limited availability of fats and oils, most of the technologies/pathways to Biojet/SAF will need to be pursued if we are to deliver the significant fuel volumes required to decarbonize aviation.

As highlighted in the report, some of the Biojet/SAF processes have encountered high capital and feedstock costs while some of the other approaches are dealing with technology challenges. The report recognizes that as Biojet/SAF fuel prices are likely to remain significantly higher than conventional jet fuel. The “right” policies will be needed to bridge the price gap and incentivize the production and use of biojet fuels and other sustainable aviation fuels.

Although ongoing improvements and optimization of the various processes will continue to reduce the cost of Biojet/SAF production and use, meeting the sector’s decarbonisation targets will be challenging and requires strong commitment of the aviation sector. 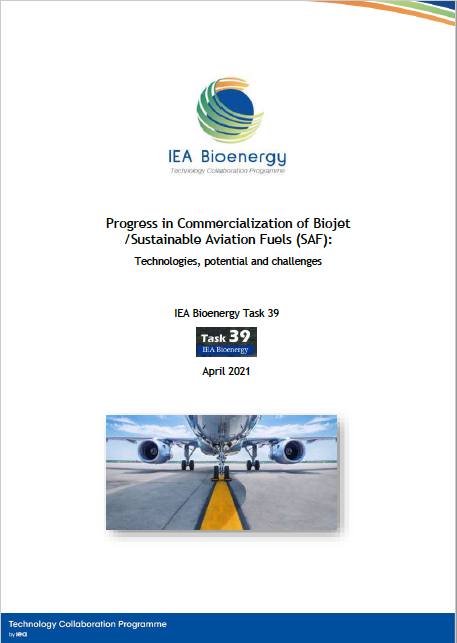 Land use for bioenergy: synergies and trade-offs between Sustainable Development Goals

How can biomass supply for bioenergy deliver multiple benefits and contribute to sustainable development goals?

Status report on thermal gasification of biomass and waste