The aim of this report, prepared by IEA Bioenergy Task 33 (gasification of biomass and waste), is to suggest gasification-based process routes to be implemented either into existing industries, either in new process chains with a focus on biorefinery systems. Gasification technology can be applied in different, already existing industrial and agricultural infrastructures. The gasification potential is huge regarding the feedstock, operational parameters, as well as products. The syngas is a stepping or corner stone for further processing and production of biochemicals and biofuels as well as heat and power. 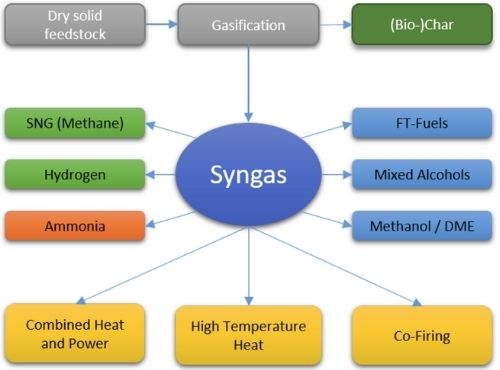 Gasification processes are relatively flexible with regard to feedstock utilization and can therefore be implemented at different positions of complex process chains such as applied in biorefinery concepts. The possible feedstocks and their limitations are comprehensively presented in section 1 of this report. Different gasification reactor types are described in chapter 2 with different applicability to biorefineries and different gas qualities as well as scalability.

Four case studies were selected and developed in separate subreports to provide a range of examples how gasification processes can be implemented into existing industries to utilize waste streams instead of disposal of those streams.

The first 2 case studies deal with either improvement of the gasification processes being applied or utilization of residues / waste streams from a pulp mill or a biogas plant. The next 2 case studies deal with the substitution of fossil fuels in existing refineries based on synthesis processes using producer gas from gasification plants based on biomass or RDF as feedstock. These cases can be seen as frame conditions but are not limited to these specific cases. Depending on the frame conditions other process combinations are possible and have to be considered in more detail.

• Case study 1: Entrained flow biomass gasification in the pulp and paper industry
Pulp and paper plants are considered as highly suitable hosts for integration of new biorefinery concepts due to, amongst other things, the already available feedstock in form of woody residues and black liquor and the opportunities for efficient heat integration. Amongst the options are thermal gasification-based concepts, where internal byproducts or side streams can be converted to energy carriers and products, either for internal use or for export. The product gas from gasification can for example be used as a fuel in boilers and kiln ovens for high temperature heating purposes or upgraded in more advanced applications such as synthesis of chemicals and biofuels. Two main gasification integration options are considered in this report: (i) replacing the bark boiler of a pulp mill with an entrained-flow biomass gasifier, and (ii) full or partial utilization of the black-liquor stream for entrained-flow gasification. The partial black liquor gasification concept creates improved business benefits for the pulp industry as they get the opportunity to, on one hand, broaden their product portfolio with, in this case, drop-in fuels and on the other hand, increase their pulp production.
Read Case Study 1

• Case study 2: Gasification coupled with anaerobic digestion for the production of biomethanol
This case study presents two pathways on methanol production from renewable feedstocks (i.e., biomass and the organic fraction of MSW) via gasification integrated with anaerobic digestion.
Methanol is an important chemical with a large employment as-it-is, as well as a key chemical intermediate, also related to the fuel sector. The first pathway describes the production of biomethanol using the producer gas from biomass gasification enriched in H2 by addition of a gaseous stream obtained via steam reforming of AD biomethane. The second pathway extends the approach to a methanol production entirely based on anaerobic digestion, where the producer gas is obtained by gasification of the residual digestate, thus aiming to maximize the exploitation of the feedstock processed as a whole.
Read Case Study 2

• Case Study 3: Integration of biomass gasification and fuel synthesis into existing refineries
This report discusses the possibilities for integration of gasification systems into conventional oil refineries for the production of synthetic biofuels. The long-term integration concept of these biofuels in existing refineries usually envisions the off-site or decentral synthesis of a raw intermediate product and its further processing and upgrading to final synthetic fuels central or on-site. However, in this report the complete synthesis pathway of the biofuels is studied on-site in the refinery by using one of Germany’s largest refineries, Mineraloelraffinerie Oberrhein (MiRO), as an example. In this study the implementation of the Fischer-Tropsch process and the Methanol/DME-to-Gasoline processes were considered. The Biomass-to-Liquid route analysed in this report is much more economic than the Power-to-Liquid route for synthetic fuel production in Germany.
Read Case Study 3

• Case Study 4: Gasification of RDF and integration into an existing naphtha cracker
This report discusses the feasibility of using gasification technology to provide circular and biobased feedstock to an existing naphtha cracker of a petrochemical plant. This approach is different to a widely investigated approach of producing liquids from biomass or from pure plastic waste streams to replace naphtha. The analysed solution is not looking at the naphtha, but at the gas which is produced from naphtha cracking and upgraded in the downstream section. Gasification allows the usage of more complex mixed streams (RDF), that produce a similar gas phase composition of olefins and aromatics, when compared to the outlet of a naphtha steam cracking unit.
Read Case Study 4

Overview of Thermochemical Liquefaction activities in New Zealand and The Netherlands

Press Release – How bioenergy contributes to a sustainable future

Assessment of Bio-hubs in Canada

Economic and operational feasibility of establishing Biohubs in the Private Native Forests of SouthEast Queensland, Australia

Environmental impacts of perennial grasses on abandoned cropland in Europe