This is the second of a case study compilation to explore lessons on material and energy valorisation of waste within the framework of IEA Bioenergy Task 36. The central technology in this case study is Hydrothermal Carbonization (HTC), an innovative process that can process a diverse range of organic waste, such as food waste, agricultural and garden waste or sewage sludges and convert them into renewable fuels (hydrochar) and biofertilizers.

The HTC process offers a unique way to recover materials from organic wastes and sludges which are otherwise difficult and expensive to be valorised. This novel technology has been developed at industrial scale during the last 10 years and represents a very stable process which simulates an accelerated process similar to the natural formation of coal. The products generated within the HTC plants can be adapted to the industry’s requirements by applying further post-treatments enabling the industries to substitute fossil coal, reducing the CO2 emissions and encouraging circular economy.

Hydrothermal Carbonization (HTC) technology has demonstrated to successfully convert biowaste and sludge into high quality hydrochar, which can be considered as a more valuable product than biochar materials. Several HTC industrial plants operate in Europe. Ingelia operates its own industrial HTC Plant in Valencia (Spain) since 2010, CPL Industries Ltd operates an HTC Plant in the UK which was commissioned in 2018, and a third plant is under construction in Belgium, expected to start operations in 2021. Ingelia HTC technology has been proven at commercial scale, reaching TRL9.

The HTC process acts as an acceleration of the natural coal formation process, working at moderate pressure and temperature (20 bar and 210°C for the Ingelia process), allowing the dehydration of the organic matter and increasing the C-content up to 60 %. By means of HTC, feedstock with high moisture content converts into a coal-like product called hydrochar. Hydrochar can be used as an energy source, a soil ameliorant, or as a feedstock to produce bioproducts.

The HTC Process takes places in closed vessels driving the emissions to the boiler to avoid any problematic compound going into the atmosphere.

HTC technology may include separation equipment for impurities that are present in the waste such as sands, stones, pieces of metals or glass that helps to improve the heterogeneity and quality of the hydrochar. However, there are some inorganic components in the carbon structure, such as Ca, K, or P, that can be reduced by specific washing and chemical post-treatment steps. The product is chemically stable and storable, preventing the emission of methane if the feedstock would be landfilled. The moisture present in the feedstock condensates after the HTC process, and solubilises elements like N, P, K, etc. These elements represent a liquid biofertilizer that can be used as a substitution of chemical fertilizers. The HTC process provides a source of renewable carbon whose properties can be adapted to its final application. The hydrochar can undergo specific post-treatment to reduce the content of K, Cl, P, Ca or Si to the limits accepted in the industry and energy sector, or to modify moisture content and density (by pelletisation or briquetting) with the aim of delivering a product that can be sold as a natural resource for fossil coal substitution. 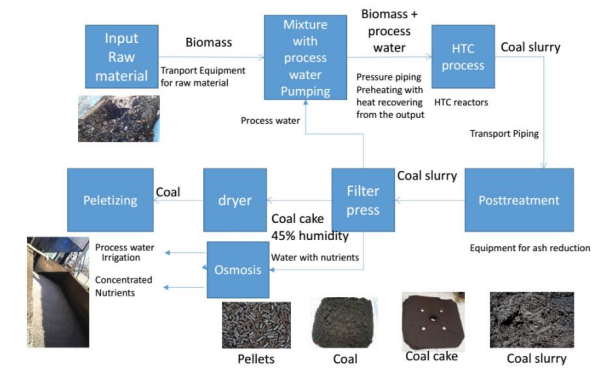 In a research project Newapp, supported by the European Commission, different feedstocks were tested at the Ingelia HTC plant and the properties of the produced hydrochar were analysed. The project was the first step for research activities on hydrochar product development and market introduction. Further research activities have been carried out for different sectors, and trials have been conducted with industries that could potentially use the hydrochar as a coal substitute reducing their environmental footprint.

A life cycle assessment was carried out to determine the potential environmental impacts (global warming, freshwater eutrophication, and terrestrial acidification) of a large-scale HTC plant processing 78 000 ton of wet biowaste and sludge per year in Italy. The analysis highlighted three major contributors to overall environmental impacts; electricity and thermal energy used in the process, CO2 produced in the process, and the organic content in the waste streams impacting the environment when applied to land. The analysis shows that there is potential for improving the environmental performance of the HTC process by optimising energy use and using greener sources of energy.

Progress towards biofuels for marine shipping

Biomass supply chains and their contribution to the Sustainable Development Goals