New Publication: Drop-in biofuels: The key role that co-processing will play in its production

Drop-in biofuels are “liquid bio-hydrocarbons that are functionally equivalent to petroleum fuels and fully compatible with existing petroleum refining and distribution infrastructure”. The predominant drop-in fuels produced today are made by converting ”conventional” oleochemical feedstocks such as vegetable oils, used cooking oils, tallow, and other lipids to fully saturated products. However, sourcing large quantities of “sustainable” oleochemical (lipid) feedstocks at a low enough cost to result in profitable drop-in biofuel production remains challenging and is a major constraint limiting the expansion of this production platform. Consequently, it is likely that “advanced” thermochemical technologies such as gasification, pyrolysis or hydrothermal liquefaction (HTL) based on more widely available biomass feedstocks will provide much of the long-term supply of drop-in biofuels in the future. While increased levels of electrification of transport will be essential to reduce global warming GHG emissions, “green electricity” is poorly suited for long distance transportation sectors such as shipping, rail and long-distance trucking.

This 2019 update of the 2014 IEA Bioenergy Task 39 “drop-in” biofuels report reviews the status of technologies, the progress of the various technical approaches and updates the successes, challenges and obstacles that have been encountered during the commercialization of low carbon intensity (CI) drop-in biofuels. The report has assessed the opportunity to use petroleum refinery infrastructure to co-process feedstocks/intermediates such as lipids, oleochemicals, bio-oils and biocrudes to finished, lower CI drop-in biofuels. 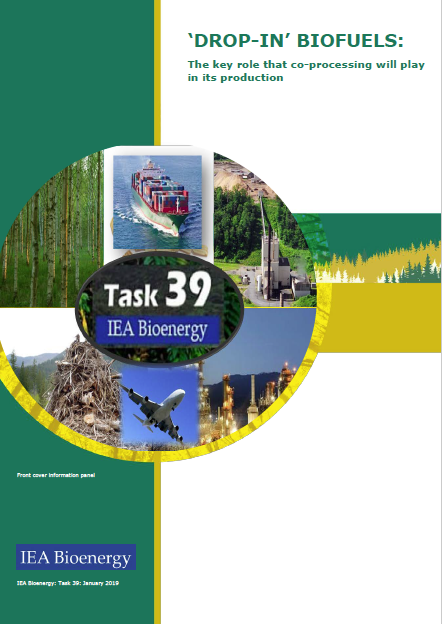 Governments and Industry affirm the future of bio-based fuels, chemicals, and materials