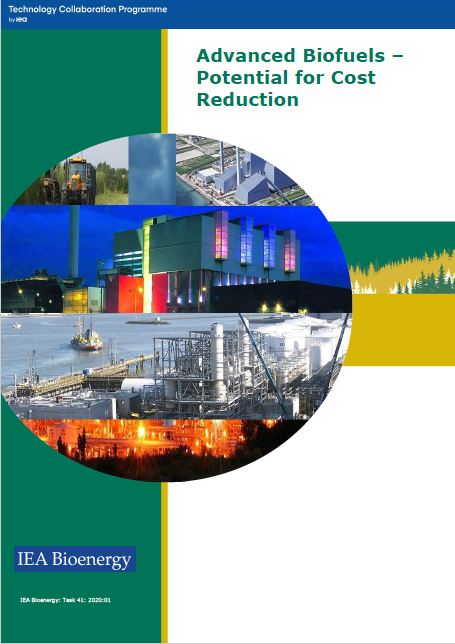 IEA Bioenergy has published today a new report on the potential for advanced biofuels cost reduction carried out under Task 41. The project is funded by the European Commission, with in kind contributions from Germany, Netherlands and Sweden. The report “Advanced Biofuels – Potential for Cost Reduction ” confirms that there is a gap between the cost of the advanced biofuels and current fuel prices. This gap can be reduced in the medium term through process improvements in designing, building and operating plants, financing costs reduction as well as technology learning. Policy support will continue to be needed to enable these technologies to mature either in terms of added value for low carbon fuels or carbon costs applied to fossil fuels.

Bioenergy already plays an important role in the global energy economy, and its expanded use is a critical element in future low carbon scenarios, where it can especially play an important role in reducing greenhouse gas (GHG) emissions from the transport sector. Decarbonising transport will require a range of bio-based transport fuels, and especially advanced low carbon fuels which are suitable for long-haul transport applications including aviation.

A number of appropriate technologies to produce such fuels are being developed and commercialised. However, so far their production has only reached a limited scale and a massive roll out of these technologies would be needed to fulfil their potential role in low carbon transport scenarios. For example, providing the 35 EJ of such fuels foreseen within the IEA’s Sustainable Bioenergy Roadmap would require some 4000 large scale production plants world-wide by 2060.

The costs of these advanced biofuels are currently higher than those of the fossil fuels which they can displace and of more conventional biofuels such as ethanol from sugar or corn, or biodiesel. It is therefore important to consider what scope there is to reduce the production costs of a range of advanced biofuels, and to identify under what conditions they could become affordable.

This new report, carried out by an experienced international team, uses as its starting point a study on the costs of advanced biofuels carried out within the programme of work of the Sub-Group on Advanced Biofuels (SGAB) (under the European Commission’s Sustainable Transport Forum (STF)) and published in 2017. The report:

Based on information gathered from industry and other sources the report confirms that there is a gap between the cost of the advanced biofuels and current fuel prices. It estimates that there is significant scope for cost reduction in the medium term through process improvements and through experience gained in designing, building and operating plants, and by reducing financing costs.

Extensive deployment of the technologies, in line with the patterns needed to meet the ambitions for advanced biofuels within low carbon scenarios, could lead to additional significant cost reductions through technology learning.

Such cost reductions would narrow the cost gap between the advanced biofuels costs and those of the fossil fuels they aim to replace but it will still be significant for many of the pathways studied.

Policy support will therefore continue to be needed to enable these technologies to mature either through an added value for low carbon fuels or a substantial carbon cost applied to fossil fuels.

In the longer term, the effective cost of using fossil fuels may rise through a combination of higher prices and/or more extensive carbon pricing. If there is an extensive increase in the production capacity of advanced biofuels at the scale envisaged within low carbon scenarios, then there is the prospect of the technologies being cost effective in the context of anticipated fossil and carbon prices for example, those foreseen in the IEA’s World Energy Outlook scenarios.

To be or not to be a biobased commodity

Case study about a MSW sorting facility in Norway – IVAR

Material and Energy Valorisation of Waste in a Circular Economy

Land use for bioenergy: synergies and trade-offs between Sustainable Development Goals